Learn about our story.

On May 31st 1969 this aerodrome was inaugurated under the name: “Aeródromo Pujol-Muntalà” with the authorization of the “Dirección de Aviación Civil”. It’s name comes from two pilot brothers form Manresa: Manel and Ramón Pujol, who developed and promoted this aerodrome privately and in land of their property, offering it to the authorities of that time for any possible emergency.

Eventually the aerodrome stopped being used until it became wilderness zone with lack of activity. Just a few pilots and Flight instructors practiced there because of the open space it offered and the it’s easy use. 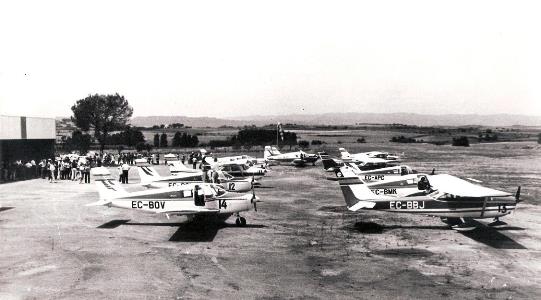 By the year 2012 three people, that developed a company for skydiving in La Cerdanya aerodrome which had a 90% of clients coming from Barcelona, learned that there existed this aerodrome at half distance from the city most their clients came from. They ordered an architect and pilot, specialist in that type of urban elements, the economic study and the feasibility of the remodeling and reopening of the aerodrome, which was already known aeronautically as Manresa’s.

After the study, the contract with the property and the Sant Fruitos’s Hall and the feasibility of the project, one of the three members, through one of his companies, buys the aerodrome to the Pujols and at the same time leases it to the skydiving company to carry on with the project. Finally, they learned that there was space enough to develop other activities, by their own or through others.
Passed some moth of adequacy of the aerodrome, which was renamed as Barcelona-Bages, elaboration of urban plans and projects with a direct contact with the mayor of Sant Fruitós and aeronautic plans with the Generalitat de Catalunya’s aeronautic division, the May 8th of 2015 the activity of the aerodrome is reopened with the skydiving aircraft landing and the first parachute jumps the next day and until today.